A Guide to Notting Hill Gate Developers built Notting Hill Gate as a residential neighborhood for the wealthy in the 19th century. Furthermore, It became known for its grand and imposing houses, many of which were built in the Victorian and Edwardian styles. In the early 20th century, immigrants, particularly from the Caribbean, began to settle in the area. This made it one of the most multicultural neighborhoods in London. Additionally, In the 1950s and 60s, artists, writers, and musicians flocked to Notting Hill Gate. They were drawn by its bohemian culture, and alternative lifestyle. Today, Notting Hill Gate is a vibrant and diverse neighborhood, popular with tourists and locals for its colorful houses, charming streets, and lively atmosphere. 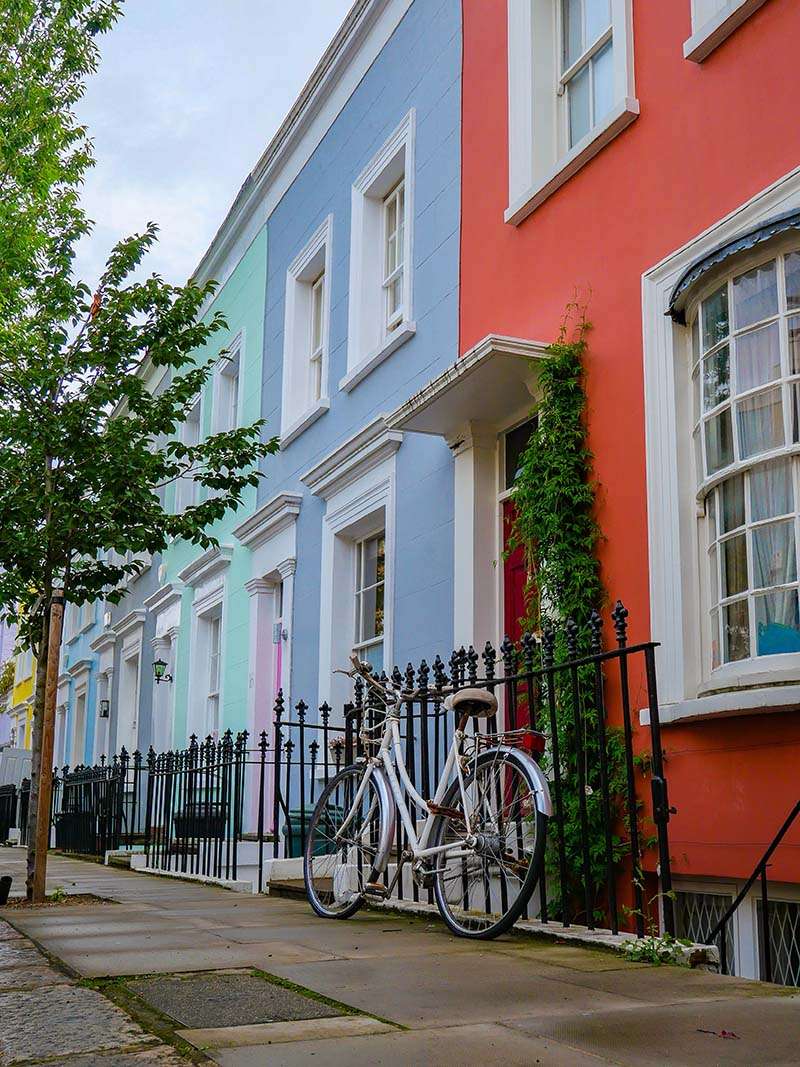 Things to See and Do in Notting Hill Gate

Notting Hill Gate is a neighborhood that is full of things to see and do. Here are some of the top attractions and activities to check out when visiting the area:

One of the most famous and popular attractions in Notting Hill Gate is the Portobello Road Market.

London, England’s Portobello Market, located in the Notting Hill neighborhood, is a popular outdoor market. It is known for its street vendors selling a wide variety of goods, including antiques, vintage clothing, and handmade crafts. The market, which is open from Monday to Saturday, features an antique market on Fridays and Saturdays. Furthermore, it is easily accessible by public transportation, with the nearest tube station being Ladbroke Grove. Visitors can find popular attractions such as vintage clothing stalls on Portobello Road. Additionally, antique dealers on Golborne Road, and street performers along the market route. To avoid crowds and have more options, it’s best to go early in the morning.

Annually in August, the Notting Hill Carnival, one of the largest street festivals in Europe, takes place. The carnival celebrates Caribbean culture and showcases a parade of colorful floats, live music, and delicious food stalls.

The carnival is divided into two main sections: Children’s Day, which takes place on Sunday, and Adult’s Day, which takes place on Monday. On Children’s Day, it is more family-friendly. Additionally, it features a parade of costumes and floats, as well as performances by local schools and community groups. On Adult’s Day, the focus is on music. It features a variety of live performances by Caribbean and other acts. Furthermore, there is a large parade of costumes and floats. Located in the heart of Notting Hill Gate, Holland Park is a beautiful and peaceful green space. It features a variety of different gardens, including the Kyoto Garden, a traditional Japanese garden, playgrounds, sports facilities, and a cafe.

The park boasts of a formal Italian garden, a Japanese garden, and a large lawn for picnicking. It also includes several playgrounds, a sports area, and a large pond. Some of its interesting features include the Kyoto Garden, a Japanese garden with a large pond. Additionally, the Holland Park Ecology Centre, an environmental education center offers a variety of hands-on exhibits and activities.

Holland Park also offers several cultural attractions. Such as the Holland Park Theatre, an open-air theater that hosts a variety of performances throughout the summer. Another attraction is Holland Park Orangery. It is a beautiful 18th-century building that can be used for events and weddings.

Opened in 1910, the Electric Cinema is one of London’s oldest and most iconic cinemas. Known for its comfortable seats and luxury amenities, it is located in a beautiful building on Portobello Road. As one of the oldest working movie theaters in the United Kingdom, it is known for its Art Deco design and luxurious amenities such as comfortable leather armchairs, footstools, a fully-licensed bar, and a café.

The theater is also equipped with state-of-the-art digital projection and sound systems. It shows a variety of films, from Hollywood blockbusters to independent and foreign films. Moreover, it also offers special events such as private screenings, live music, and Q&A sessions with film directors and actors. It is a unique and luxurious way to watch a film and a great place for a special night out or to catch a film that might not be available elsewhere. A charming independent bookstore, The Notting Hill Bookshop, also known as Books for Cooks, is located on Notting Hill Gate. It is a specialty bookstore known for its extensive collection of cookbooks and food-related literature, considered one of the best cookbook stores in the world.

The bookstore boasts of a wide range of cookbooks from around the world and for all levels of cooking, from amateur to professional chefs, and also has books on food history, culture, and memoirs. It offers a range of cooking classes and events, such as book signings and meet-the-author events. The shop also has a small café and a selection of ingredients, kitchen tools, and cookbooks for sale. It’s a great place for food enthusiasts and cooks to browse and find inspiration for their next recipe.

6. The Museum of Brands, Packaging and Advertising

The Museum of Brands, Packaging and Advertising, located in the Notting Hill neighborhood of London, England, is dedicated to showcasing the history of consumer culture and advertising through a collection of over 12,000 objects, including packaging, advertising, and household items. It arranges the collection chronologically, starting from the Victorian era and continuing through to the present day, covering a wide range of consumer products such as food, fashion, and technology.

Visitors can also explore the interactive Time Tunnel, which displays the history of advertising in the UK from Victorian times to the present day. The museum also houses a shop that sells a wide range of retro and vintage-inspired products and a café. It is a unique and interesting place for visitors to learn about the history of consumer culture and advertising and to see how it has evolved over the years.